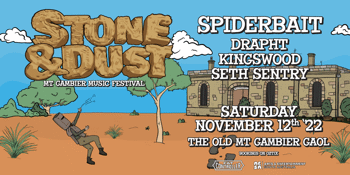 G’DAY MT. GAMBIER! South Australia’s newest music festival STONE & DUST is coming to the Limestone Coast this November. Held in the 150 year old Old Mount Gambier Gaol, this will be a truly unique atmosphere to experience, with gates opening at 12pm and running into the evening until 10pm.

SPIDERBAIT were once just three friends from a small country Australian town taking on the Australian music scene on their own terms. 25 years later, their friendships remain unscathed, and their band one of the biggest and best on the national scene. Spiderbait have racked up pretty much every accolade there is to achieve on the Australian scene, having taken home numerous ARIA Awards, chalked up a number one single (their 2004 cover of Leadbelly’s Black Betty) and even topped the prestigious triple j Hottest 100 (for Buy Me A Pony, 1996).

DRAPHT is a songwriting prodigy with a platinum record, multi platinum and gold singles and two ARIA’s under his belt. Whether you focus on his lyrics, his melodic hooks (or focus on nothing at all and just enjoy yourself) as a songwriter Drapht can pretty much do everything. Each of his seven albums brought increasing levels of complexity and refinement, ascending Drapht to the absolute upper echelon of Australia's stacked card of hip hop heavyweights. Already, he is one of the greats.

KINGSWOOD are a dynamic force onstage with five eclectic and critically acclaimed albums under their belt. They have toured with AC/DC, Aerosmith and have sold out countless shows. Establishing themselves as one of Australia’s most formidable and engaging live acts, Kingswood’s drive and ambition in reinventing and flourishing within the realm of new sonic influences has remained at the centre of their work.

SETH SENTRY’s albums have been marked by progression both musically and in terms of his career. His debut album This Was Tomorrow was an instant classic, sending him on an impossible tear that manifested in a gold record, an ARIA nomination, Channel [V] Artist Of The Year and a dream come true appearance on Jimmy Kimmel Live. He earned a legion of fans worldwide, cementing himself not just as one of the most exciting artists of the decade, but as a jaw-dropping live performer.