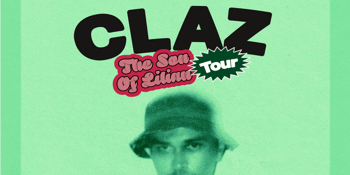 CLAZ - The Son Of Lilian Tour

Adelaide’s own son, Claz, a hip-hop/soul/house musician and proud ambassador of the inner city is returning with his first album launch in over 3 years, playing a live show at Fat Controller.

Equipped with a large and skilled line up, he’ll be performing in his hometown as the final show of the ‘The Son Of Lilian’ national tour.

Headlined by Claz himself, the man’s also gonna bring Mog.Y (Melbourne) over the border as the main support act. Local talents Kirby and Iggs will be holding down solo sets too. Finally, Adelaide OG’s Prospeks (MPC Set) and Rela (DJ Set) are going to be present to add the cherry on top of an already massive bill.

$15 pre-sale tickets, or $20 on the door, be sure to secure your ticket in advance as this will be a night not to be missed.